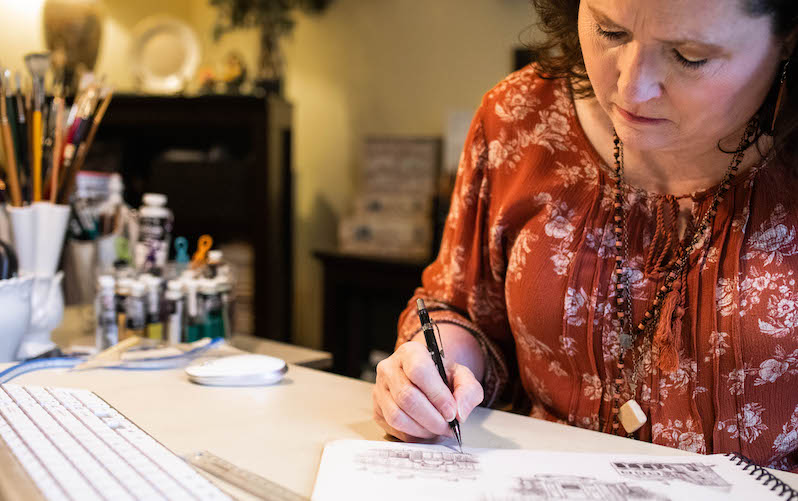 Christi, who’s lived in Hoover for the past 16 years, has loved drawing since she was a child. One of her earliest memories related to art was when she drew a picture of a giraffe for her grandfather. “He remarked how good it was,” she recalls.

While her hometown of Thomasville, Alabama, didn’t offer art classes in school, she found other creative outlets—like as a high school cheerleader creating the breakthrough banners they used for the football team.

So, it shouldn’t have come as much of a surprise when she wanted to major in art in college. Her father pushed back though, telling her she wouldn’t make money in that field. Following his advice, she decided to major in advertising at the University of Alabama, with a minor in studio art and graphic design.

It was during her time at the university that she had her “lightbulb moment,” as she calls it. One of her art professors, Richard Brough, took her class to the Quad in front of Denny Chimes to look at the surrounding buildings. He instructed the students to look at the architectural structures to teach them about perspective. 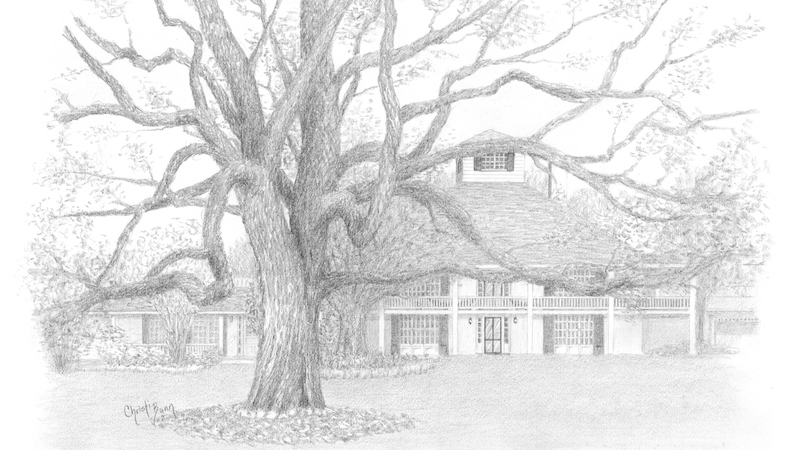 “We looked at all of the buildings from where we sat and saw the closer we were, the steeper the angles were,” she says. “It was a lightbulb moment for capturing perspective in realism. That gave me a fuel to figure out my niche.”

She’d have to hold off on that niche for a while though. After college, she got married and moved to Birmingham, where she worked as a graphic designer for an energy company. When the company was bought and her job was eliminated in 1999, she decided to create her own web-design company, Bunn Media, and worked on websites and graphic designs.

Freelance work was a perfect fit for her then because it allowed her to stay home with her three small children, which had always been her dream. As they grew up, though, Christi found more time for one of her other loves, art.

She decided to jump back into it by creating graphite drawings of her mother’s and mother-in-law’s houses to give to them as Christmas presents. They were so impressed with her work that they shared them with their friends, and the rest, they say, is history.

Soon, Christi was being commissioned from others in the area and eventually from people across the country for drawings of cherished homes, churches and even pets. 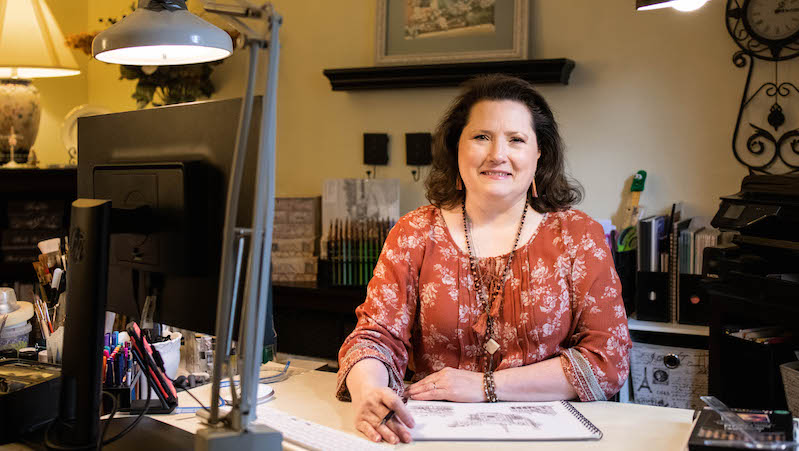 Today, she has completed more than 250 commissioned pieces using watercolors, graphite and oil. She draws everything by hand or using a straight edge, primarily working from photographs for her inspiration.

If she’s working on a piece for someone local, Christi offers to drive by and take photos of their home or other building. She says it’s also important for her to see the landscape around a structure because that shows her how the structure relates to its surroundings.

Besides drawing homes, some of her most requested pieces come from her “Bama Art” collection, which features images like the President’s Mansion, Denny Chimes and Bryant Denny Stadium on game day—harkening back to her lightbulb moment that day on the Quad.

Christi also works with Bluff Park’s Pat Campbell and her wedding invitation and stationery business, Fine Paperwork. So far, she’s drawn a church where the couple was getting married, created a stained-glass watercolor on wedding stationery and created other commissioned designs to make a couple’s big day even more special.

Overall, one of her favorite pieces to create was a huge watercolor of Christ Community Church in Columbus, Georgia. The painting brings the building’s angular design, stained-glass windows and towering cross to life, and surrounding the colorful image of the church were six other locations where the congregation previously met: a car dealership, home, hotel, movie theater, school and daycare building. “It was a challenge but also a privilege,” she says about creating the piece. 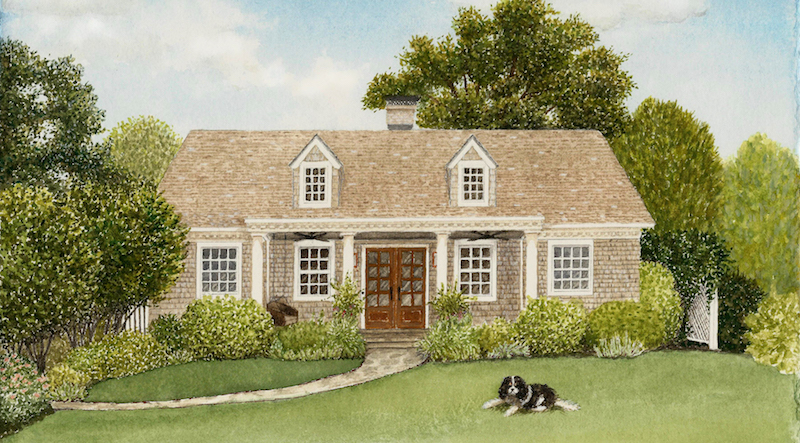 When she isn’t working on commissioned pieces, Christi says she enjoys painting flowers. “I do so many angular, black-and-white pieces, so what I do for fun are colorful flowers.”

She also participates in the local art community through art shows, including one at Aldridge Gardens and on the board (and as president) of the Mountain Brook Art Association.Three years ago, she joined the Hoover Arts Alliance (see sidebar for more information), and she is also involved with Emmanuel Church, where her husband, Andy, is the pastor.

Whether she’s drawing someone’s childhood home or painting a colorful flower in her free time, the goal for all of her projects is the same.  “I just try to capture the beauty of the piece.”

Spreading the Love of Art

Christi Bunn joined the Hoover Arts Alliance three years ago and now helps with the group’s online presence, from the website to social media pages. “It’s a group who has a passion for seeing the arts in Hoover flourish,” Christi says. “We want to see the arts become more prominent in the Hoover area.” Here’s a list of some of their projects:

-Giving more than $3,000 in scholarships each year to high school seniors who plan to major in an art discipline in college,

-Supporting schools with financial grants for equipment and projects

For more information on the Hoover Arts Alliance, visit hooverarts.com. 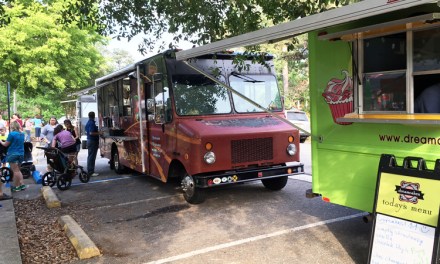 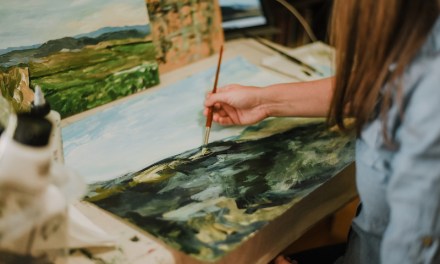 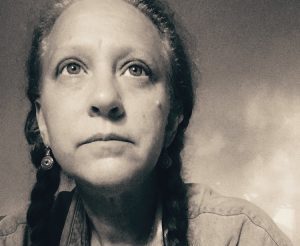 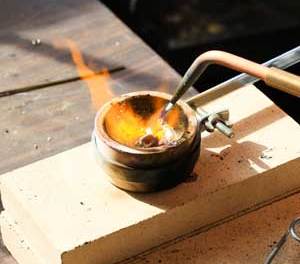