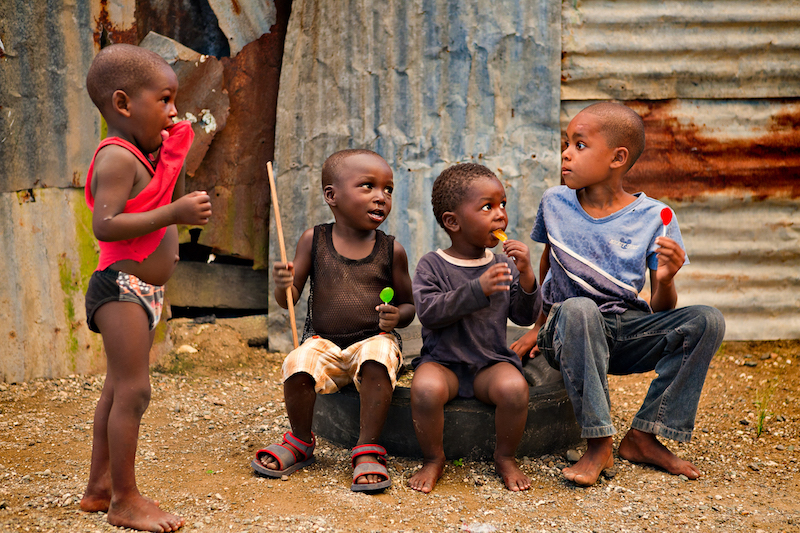 When Iris and Jeff Franklin were looking at home lots in Ross Bridge more than a year ago, they knew exactly what they wanted in the surroundings of their custom-built Mediterranean-style home.
“We wanted a lot that either had water, golf course or view,” Iris Franklin said. “We got it all – water, golf course and a view.”
And, Jeff added, a “really good bonus” is the view won’t change. After 11 years of living in other states, the couple and their three children were moving back to the Birmingham area from Mississippi for Jeff’s job. They knew what they wanted––and didn’t want––in a home and a community.
“We did not want to be down (U.S.) 280 because of the traffic,” Iris said.
The Hoover City School System was another major factor in their choosing Hoover’s Ross Bridge. Several of the family’s friends that already lived in Ross Bridge had told them about one of its newest neighborhoods, Glasscott, and suggested the Franklins consider settling there. They followed the advice and found a lot that fit their vision. Iris spearheaded the task of designing a house to build on the lot. She drew inspiration from interior and exterior photographs of homes she found online, and incorporated elements the family wanted as she compiled notes and hand-drawn layouts of each room and space.
“My wife gets all the credit,” Jeff said. “She did a good job designing all that. It’s a pleasure to be back home in Birmingham. The house turned out almost exactly the way we planned.”
With its unique clay tile roof (only one other home the family knows of in Ross Bridge has this type of roof, too), the nearly 7,000-square-foot home is a tribute to the family’s affinity for Italy and other travels abroad.
“We travel a lot in Mediterranean, and that’s really where the concept of the house came from,” Jeff said. 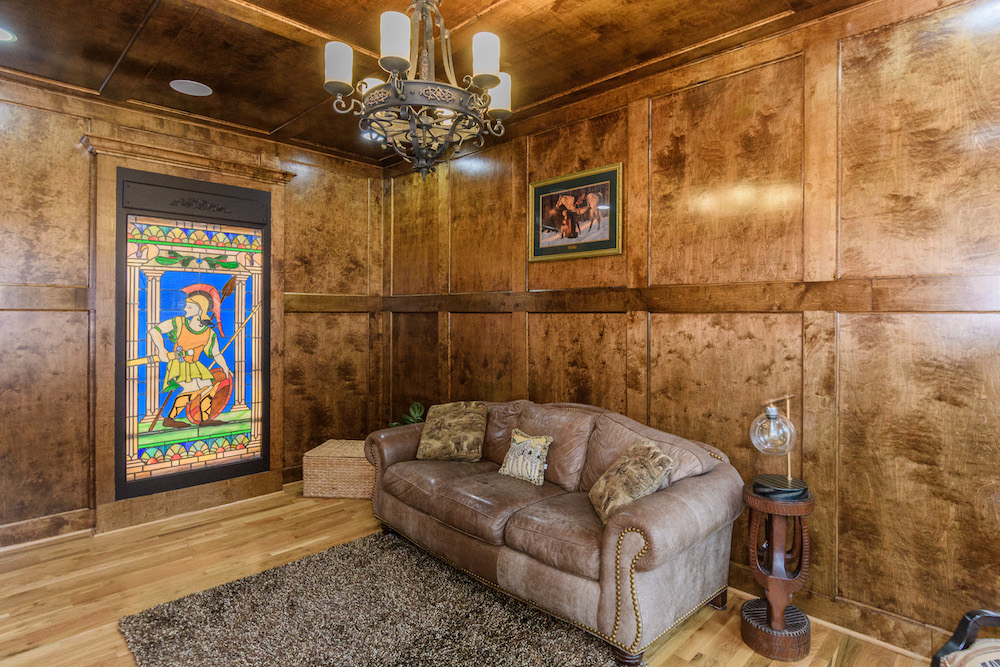 Right off the foyer is a sitting room that, with its floor-to-ceiling stained wood walls and leather sofa, resembles an old-fashioned men’s smoking room.
The conversation piece in the room is a large stained glass piece depicting a Greek soldier mounted on the back wall.
During their first stint in Birmingham, the Franklins purchased the piece, which formerly hung in a Greek restaurant in the city.
“He’s been in three different houses,” Iris said of the soldier. “It’s something different.” 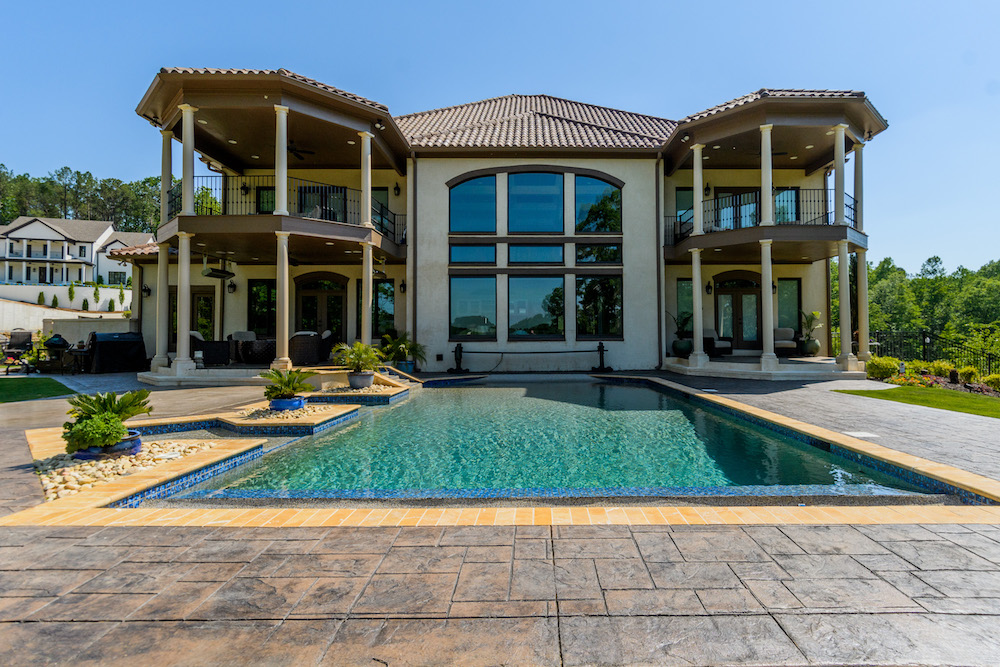 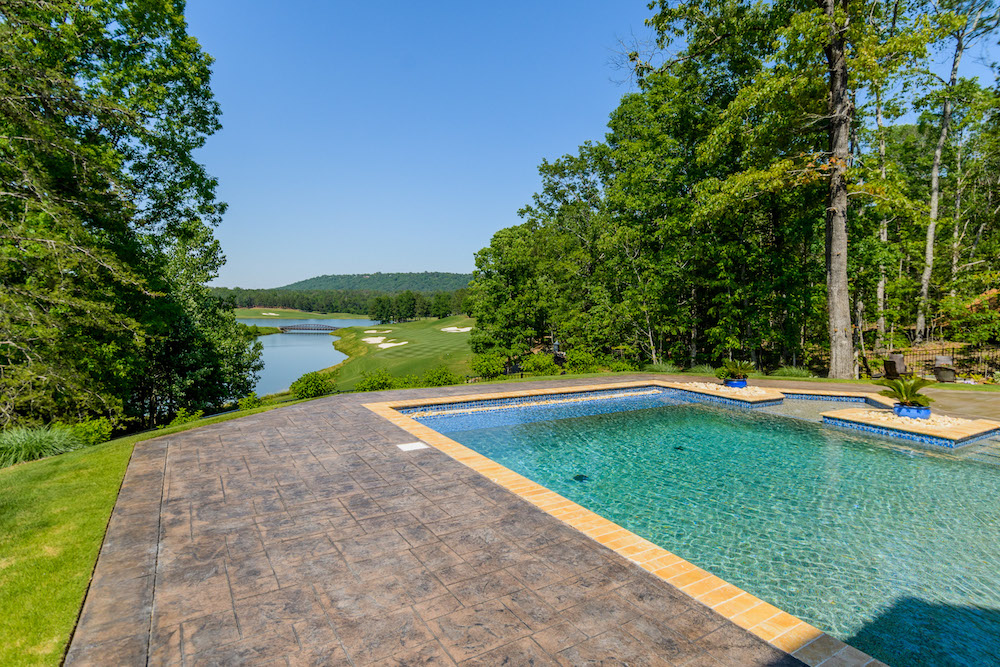 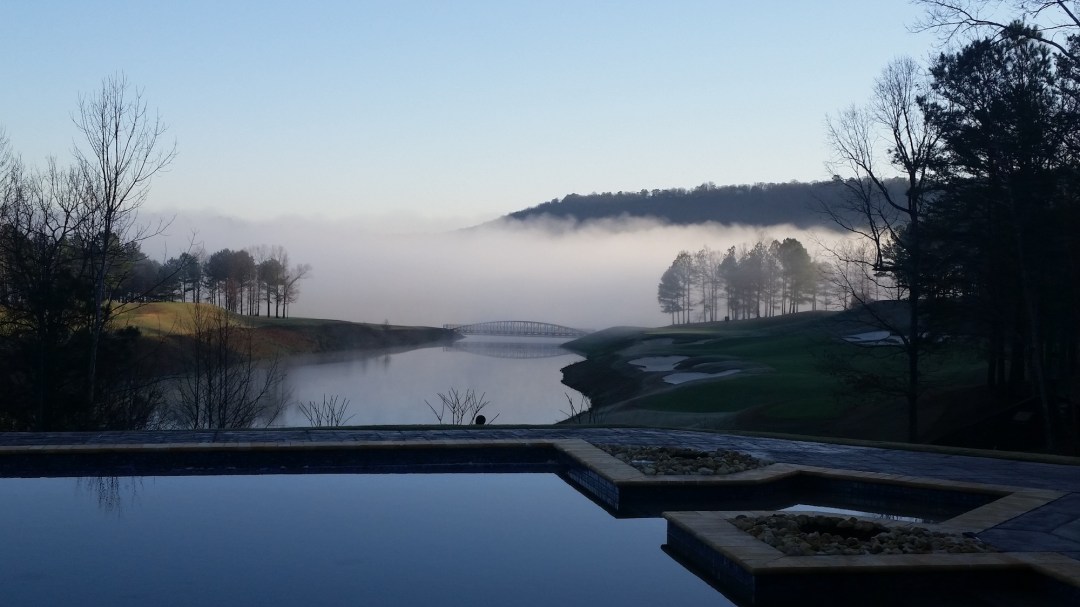 The Franklins’ outdoor living space is as inviting as the interior of their home. When they step out of their back doors, they have multiple options: They can stay in the shade of one of the main-level sitting porches; they can take a dip in the pool or relax in the hot tub; or they can walk a few paces to the fire pit area, a nice spot even without a fire. “We really enjoy the back patio with the fireplace,” Jeff said. “Right outside the door of the kitchen, we have heaters. We can use that space all year. I spend a lot of time out there.” Jeff said they are planning to incorporate a private courtyard in the backyard to create a more private outdoor space. “It will have the same look as the house,” he said, adding the courtyard will feature red ceramic tiles similar to those on the home’s roof, along with an arched, heavy European door, arbors and possibly grapevines. 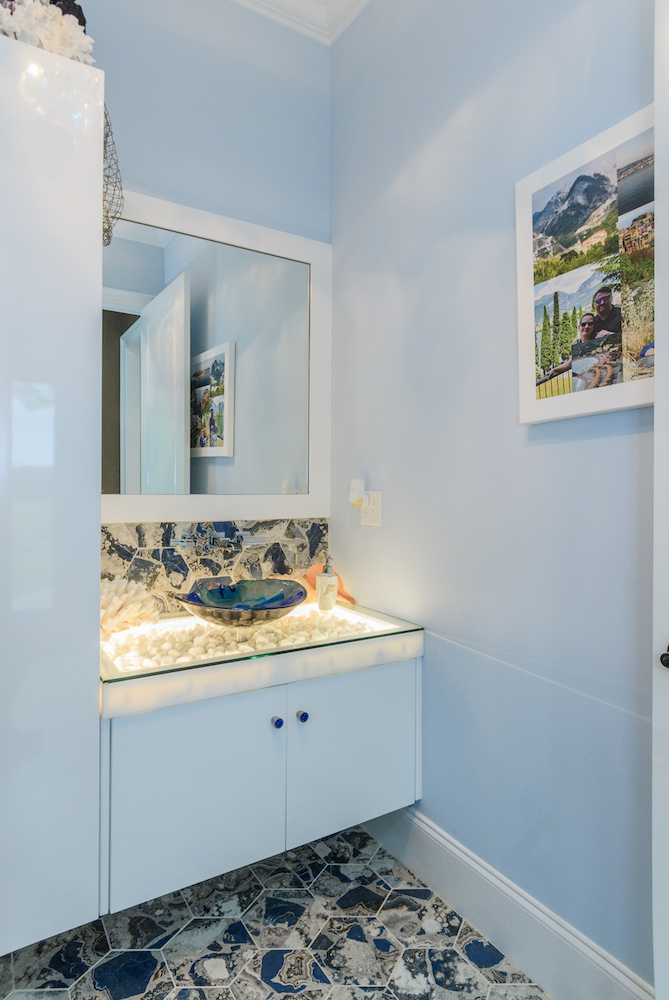 A bathroom on the main level, easily accessible from the pool, was a must-have on the family’s floor plan list.
The basin sink, crafted by a local artist, seems to float on the clear glass counter above a layer of stones, and the blue, beige and cream tile floor resembles dark ocean waters off the coast of Italy, speckled with sunlight.
“It has an Italian beachy feel,” Iris said of the room. “This was the fun room to get creative and kind of be different. The sink is what started it all.” 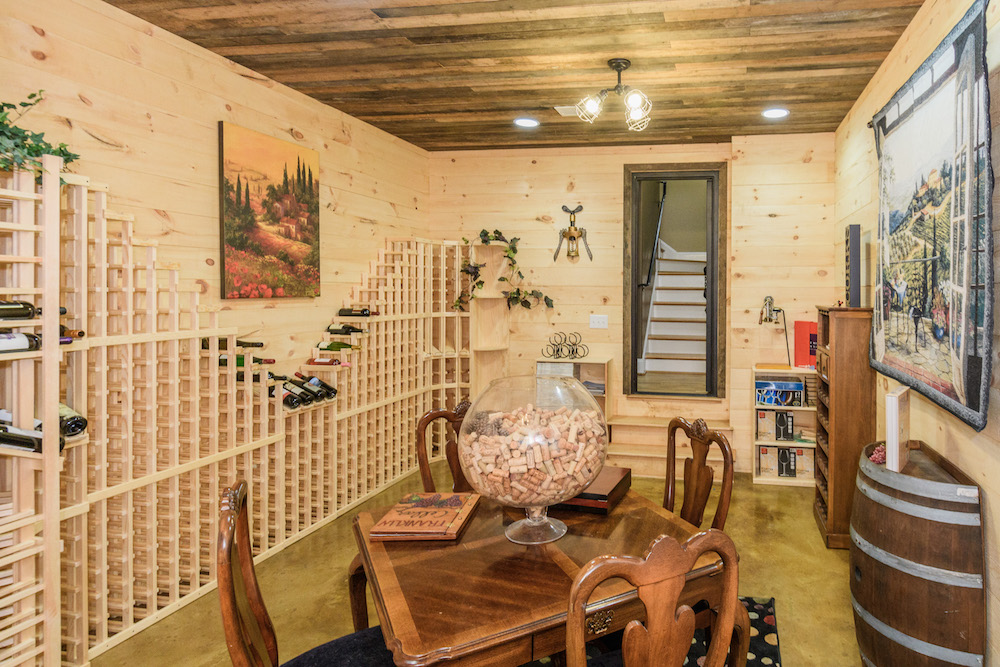 Tucked away down the stairs leading to the basement is the wine cellar. The Franklins’ builder found the wood lining the cellar’s ceiling at a place in north Birmingham that sells reclaimed wood.
“According to them, it came from an old distillery in the Louisville (Kentucky) area,” Jeff said.
They ordered customized red wood wine racks online from Wine Racks America, and left the wood untreated for a natural look. 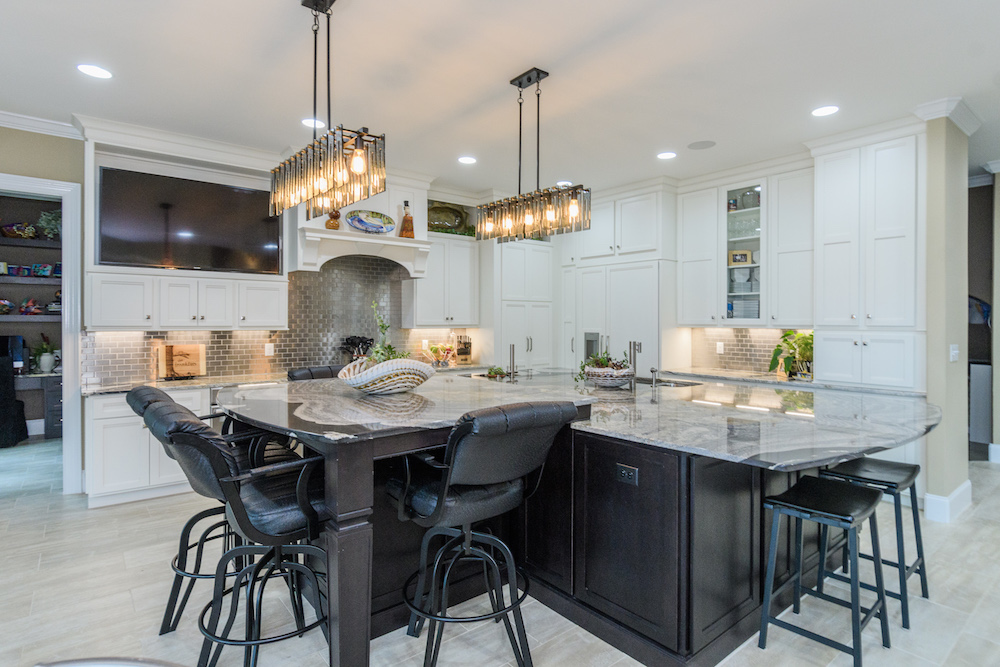 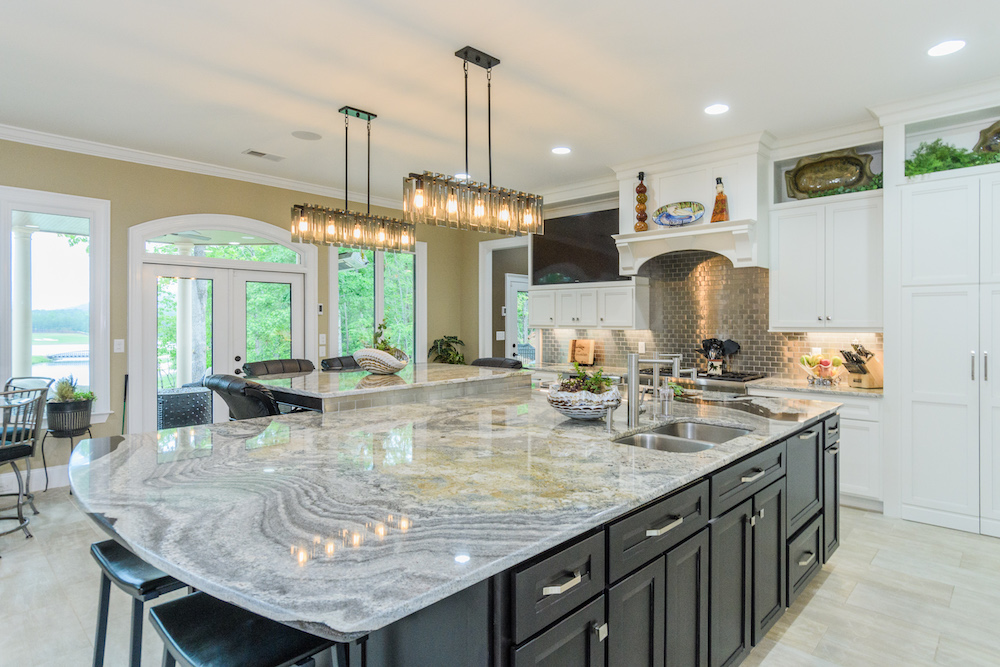 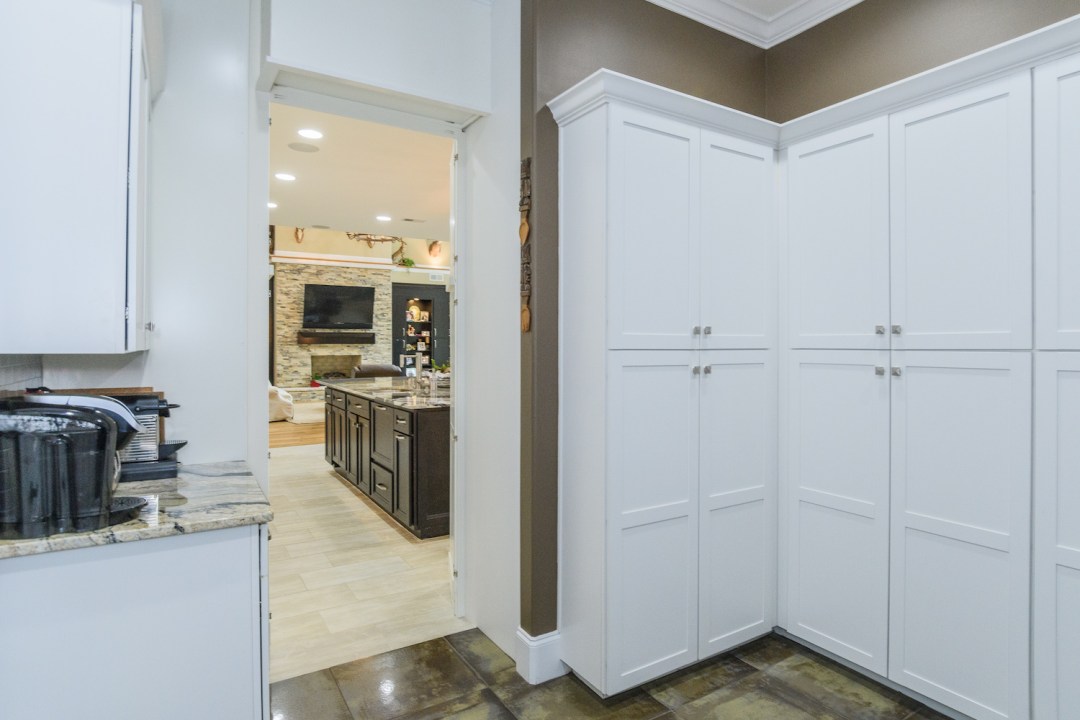 Much of Iris’s time was devoted to designing the kitchen. The centerpiece of the kitchen is a large, Brazilian dark granite island with a built-in full dishwasher and half-dishwasher, an appliance Iris said she loves because of its convenience. Jeff helped determine the layout of the kitchen, a haven for him in the evenings after work.
“For Jeff, cooking is how he relaxes,” Iris said.
The kitchen boasts an electric stove with two burners, along with two ovens. Silver pulls on the cream cabinets and drawers give the room a modern finish, and a stainless steel subway tile backsplash adds a sleek touch to the walls.
“This is exactly what we had in the last house,” Iris said of the backsplash.
But the showstopper in the kitchen––an element not immediately noticeable to first-time visitors––is what the Franklins call a “hidden pantry,” a spacious room located behind two doors masquerading as cabinets in one corner of the kitchen. The hidden pantry affords ample shelf space for food, as well as a coffee bar and laundry area.
“That’s pretty cool,” Jeff said.
Iris and Jeff had a solid idea of what they wanted in a kitchen before construction started.
“We had redone a kitchen in the last house we lived in, so we had been through remodeling process before,” Iris said. 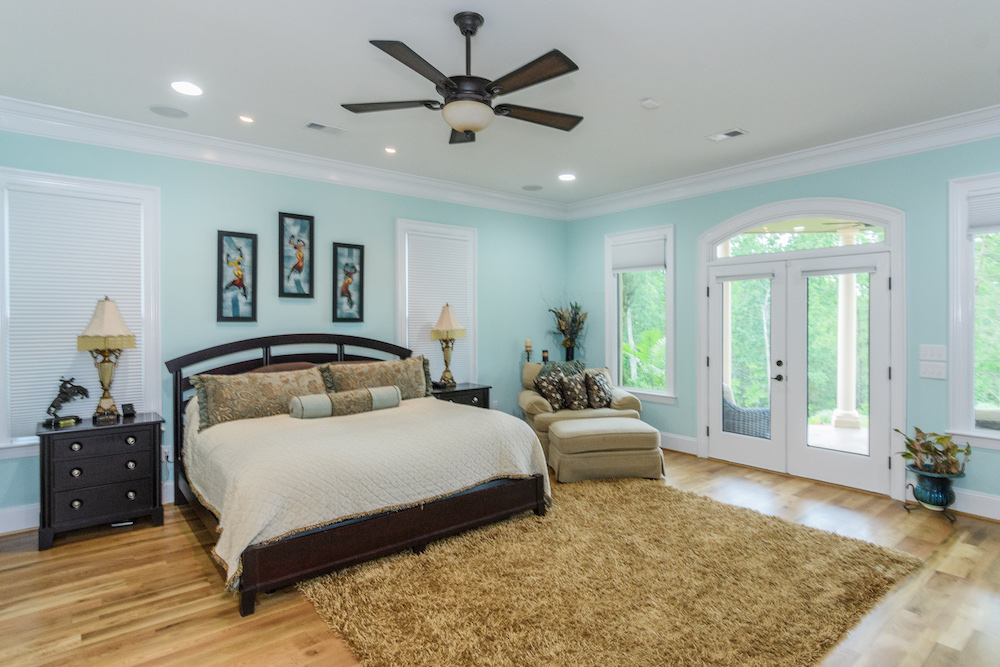 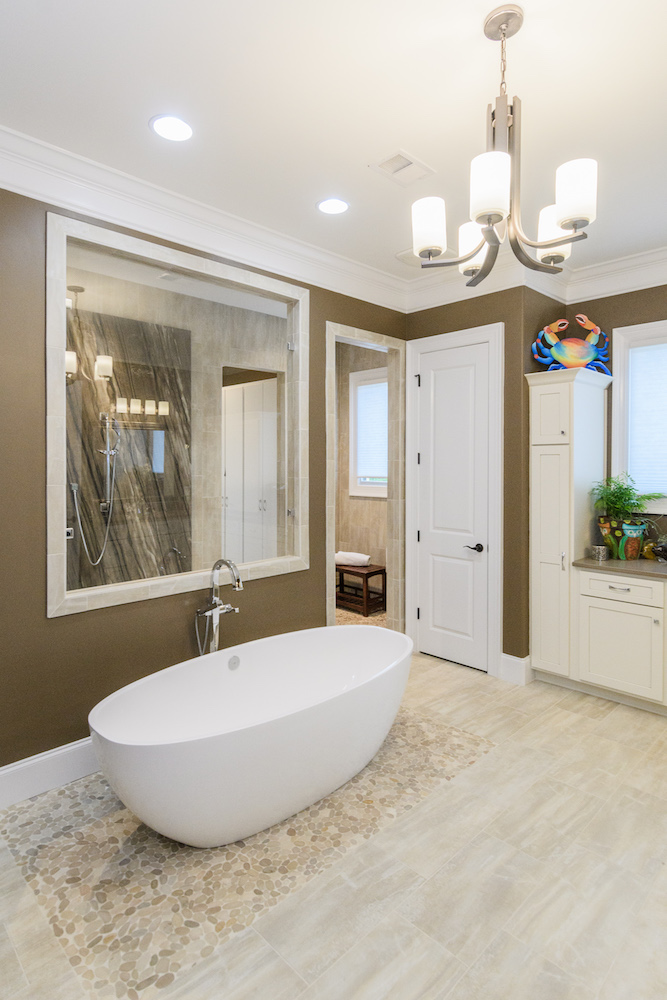 The master bedroom is on the main level and features a set of French doors that open onto a small sitting porch. The master bathroom harbors many elements Iris and Jeff hand-picked, but the centerpiece around which everything else revolves – the element that catches one’s eye as soon as the door opens – is the earth-toned granite slap on the wall in the walk-in shower.
“I love my shower,” Jeff said. “When we leave for a trip, that’s the first thing I look for when we get home.”
Behind the shower and bathtub is a walk-through closet. The couple have dual vanities. 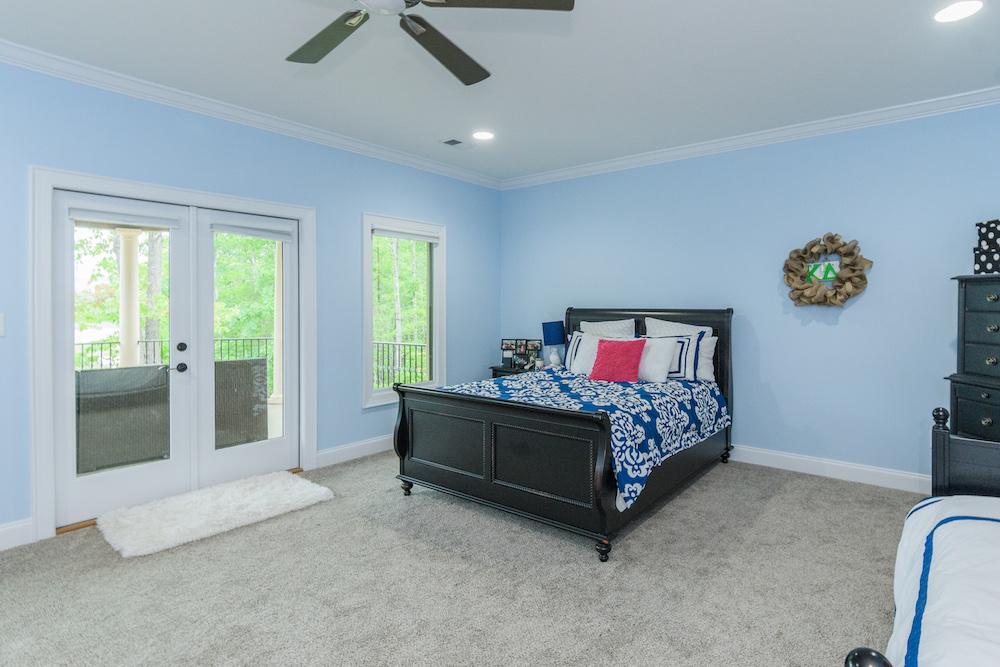 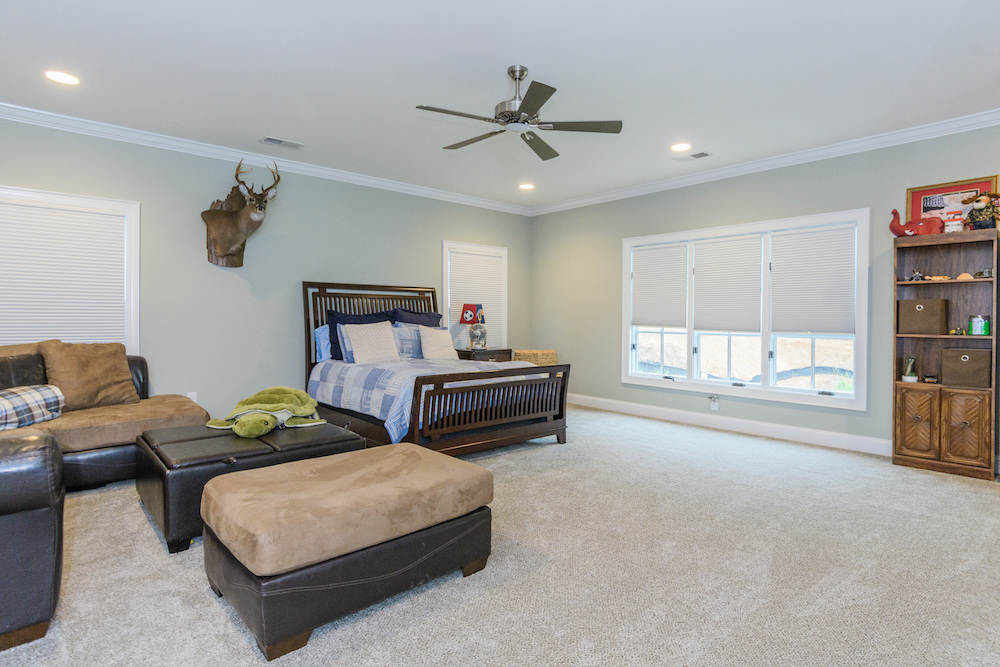 The Franklin’s three children each have their own bedroom and bathroom on the second level of the home. The two daughters’ rooms each have a sitting porch overlooking the same serene view of the golf course and water as the main-level porches and pool area. 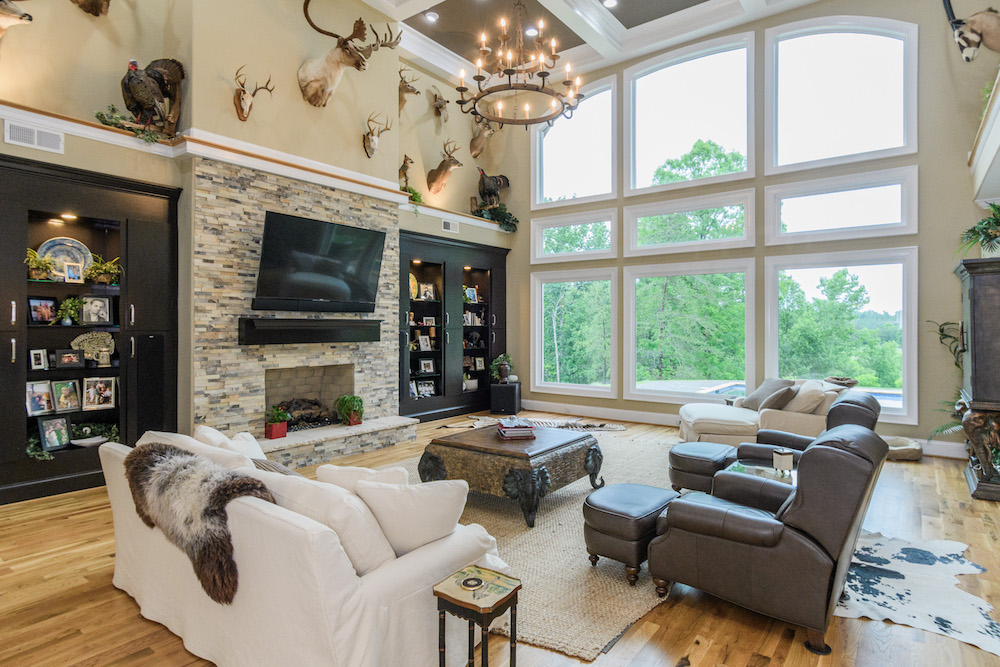 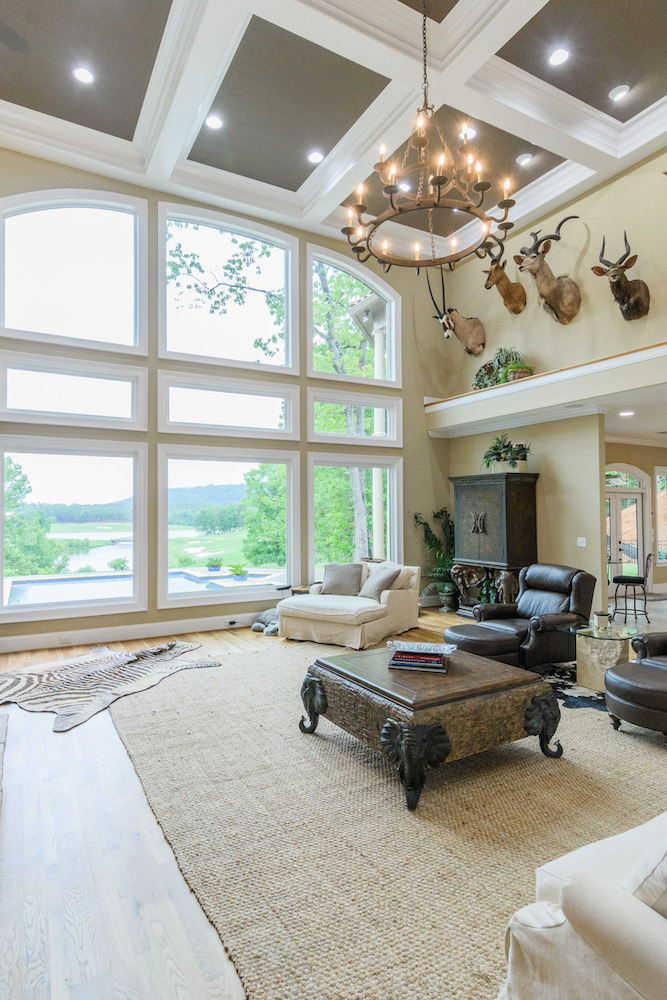 The living room features an airy, rustic atmosphere with high ceilings, a slate fireplace and large windows overlooking the pool and view across the water and golf course.   Jeff is an avid hunter, so designating a room in the family’s new home as a “trophy room” for his animal heads was a necessity.
“I knew we needed a tall space for that,” Jeff said.
The room is also a gathering place for the family and their guests, particularly in the fall. Thanks to the open floor plan, the television in the living room can be seen from the kitchen, too.
“We watch a lot of college football,” Jeff said. “Having an open concept was key for that reason.” 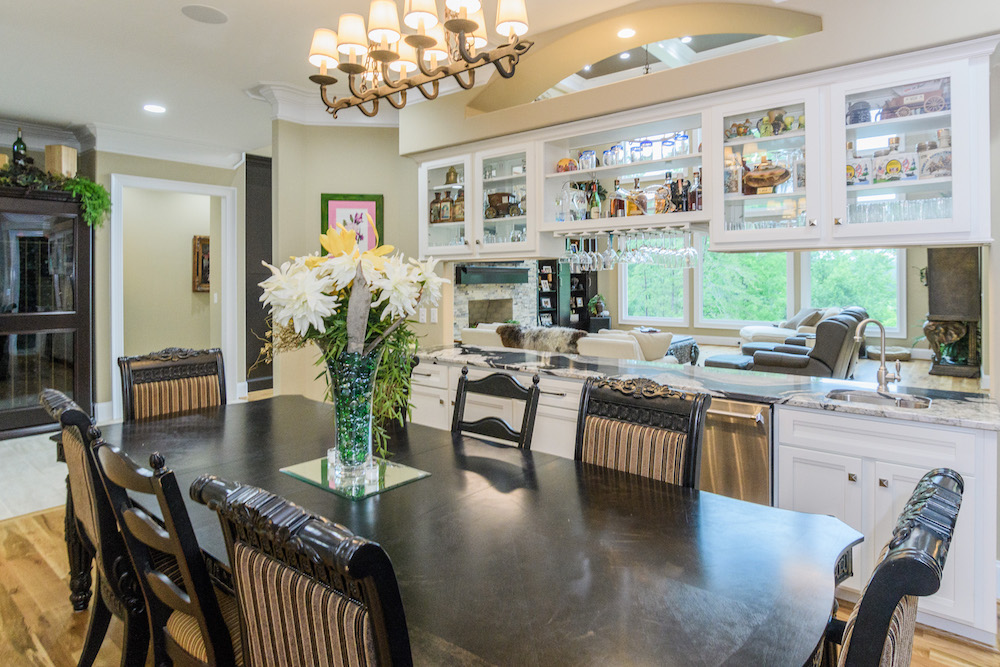 The dining room and den are separated by a bar that runs the length of what otherwise would be a wall. The space between the bar’s counter and overhead cabinets and racks for glassware give both rooms an open feel. 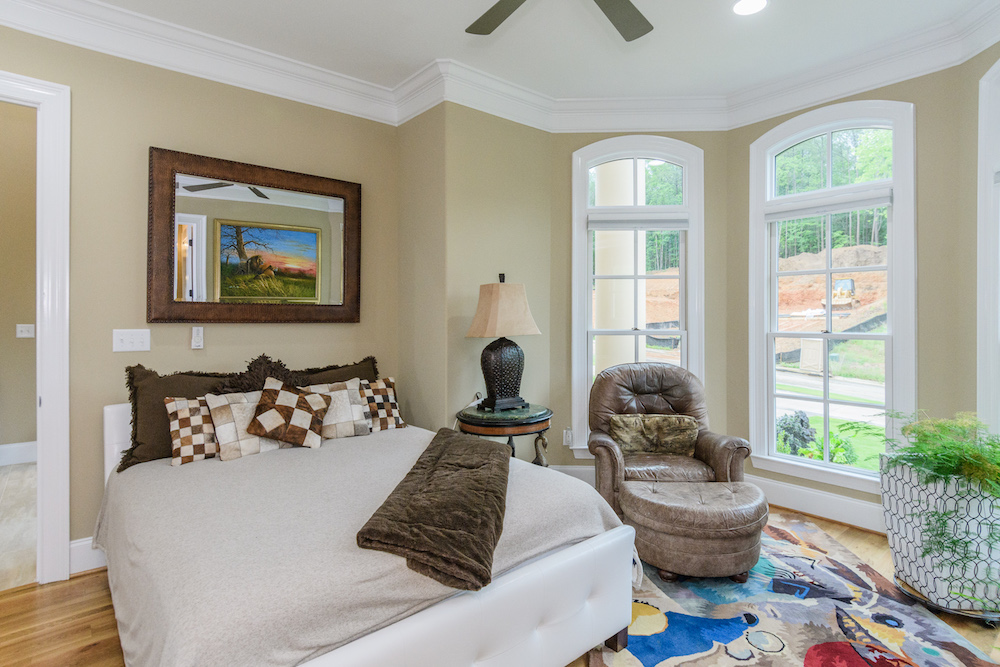 “As our parents get older, we wanted to have a bedroom on the main level,” Iris said. The bedroom and bathroom are handicap accessible and are located immediately off the foyer, across from the sitting room. 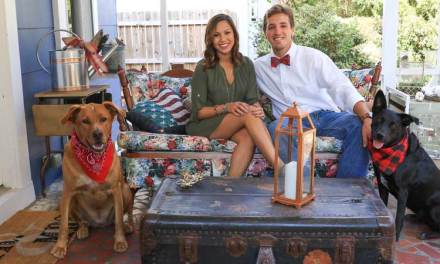 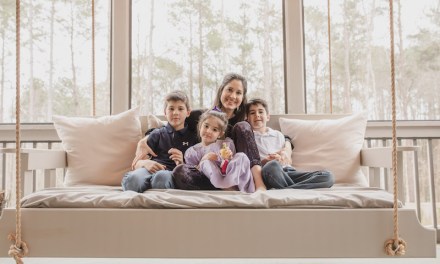 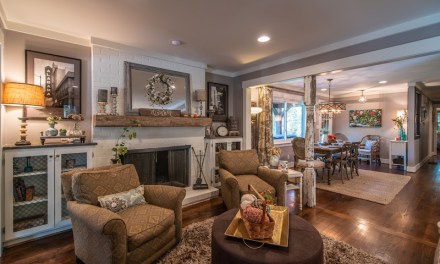 Fixing Up A Forever Home 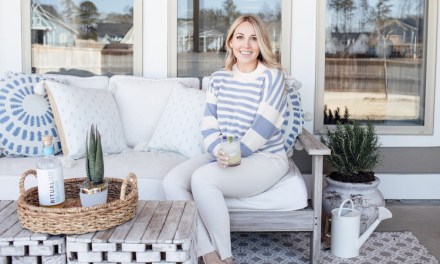